Featuring three chronograph sub-dials, which is pretty unusual for Panerai watches, this attractive model unites modern components using a renowned classic layout. Among the most notable timepieces by a very intriguing Panerai 2011 variant (read our reviews of the Luminor Composite Marina 1950 3 Day Automatic as well as the Luminor Submersible 1950 3 Days Automatic Bronzo 47 mm), the Luminor Chrono Daylight comes in the standard dimensions for the Contemporary collection, together with all the 44mm case. It is made of 316L brushed steel, in addition to the bezel, the crown and the push-pieces. This strong men’s watch is powered using all the Panerai OP XII Calibre self-winding movement which is the third part altered by the Italian watchmaker. It comprises 27 stones, monometallic Glucydur® balance and also the Incabloc® anti-shock device. This Officially Certified Chronometer oscillates with 28,800 vibrations per hour and includes a power reserve of 46 hours.The extra-quality mechanism provides standard time-keeping and chronograph functions. Its black dial features three chronograph sub-dials — the 30 second counter is situated in the 3 o’clock position, the 60 seconds counter is in the 9 o’clock position, whereas the 12 hour counter takes the 6 o’clock position. There’s a date window at the 4:30 o’clock place. Luminous Arabic numerals, hour markers and a coat of anti-reflective sapphire provide great legibility.The Panerai Luminor Chrono Daylight 44mm watch is available with a black personalized leather strap and a large-size brushed steel buckle. 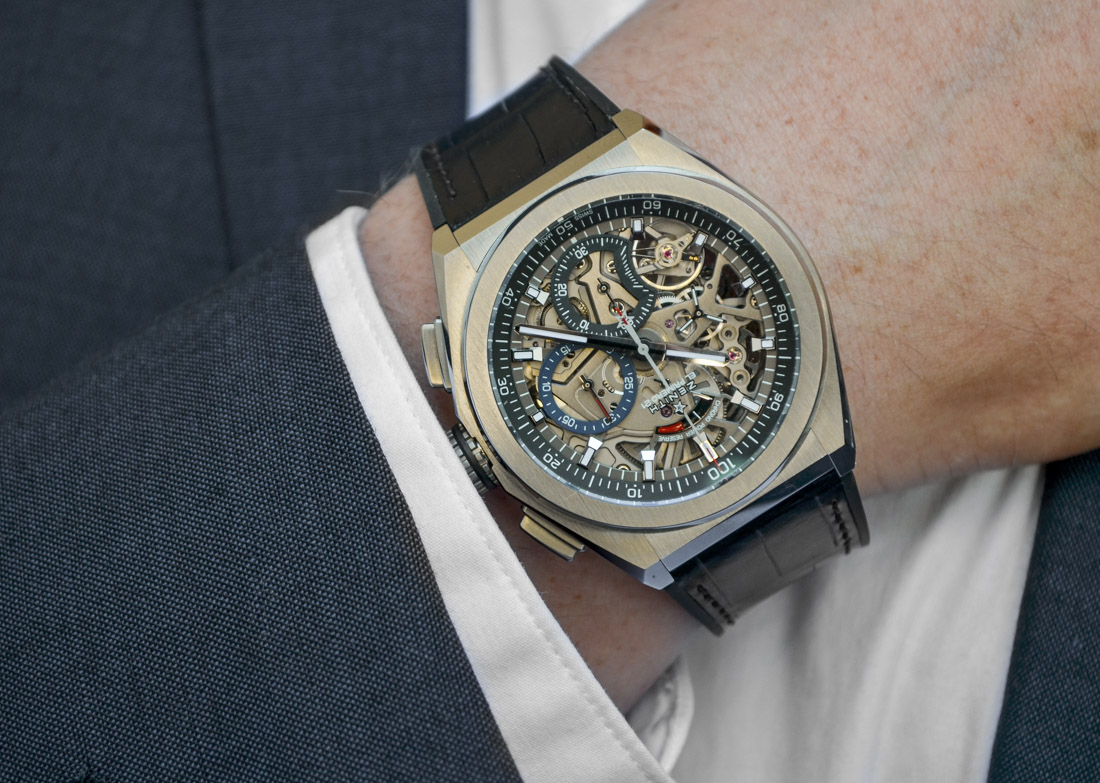 Rewinding back a little over a year to Baselworld 2017, there were really just a handful of watches that grabbed my attention and the Zenith Defy El Primero 21 (Hands-on here) led the pack. In fact, it was among my favorite watches from last year. It checked all the right boxes. Fun to look at? Check. Functional chronograph? Check. Modern movement? Check. Reasonably affordable? Check. When I got the opportunity to review the titanium model, I jumped. For the most part, it lived up to the hype I had for it.

Before we delve into the watch, let’s discuss a bit of the history behind Zenith, the context of the Defy model, and why this watch was exciting (for me at least). Introduced in 1969, the El Primero was arguably the first fully integrated automatic chronograph. Followed shortly after came the Zenith Defy, a watch that was definitely a step out of normality for a brand. It was a very cool 3-hander (look familiar?) with a date window at 4:30 that I’ve come to find isn’t as easy to obtain as one would think. The Defy models have progressed, a few residual models were released, but nothing has been as interesting as the original design. 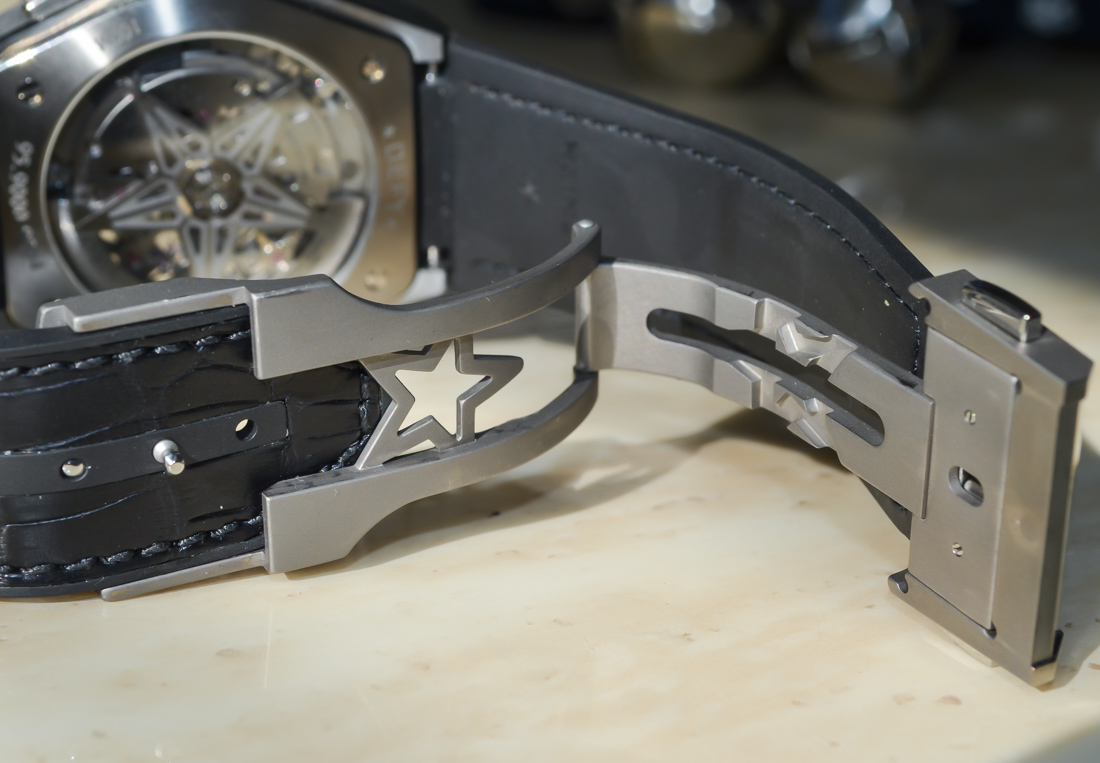 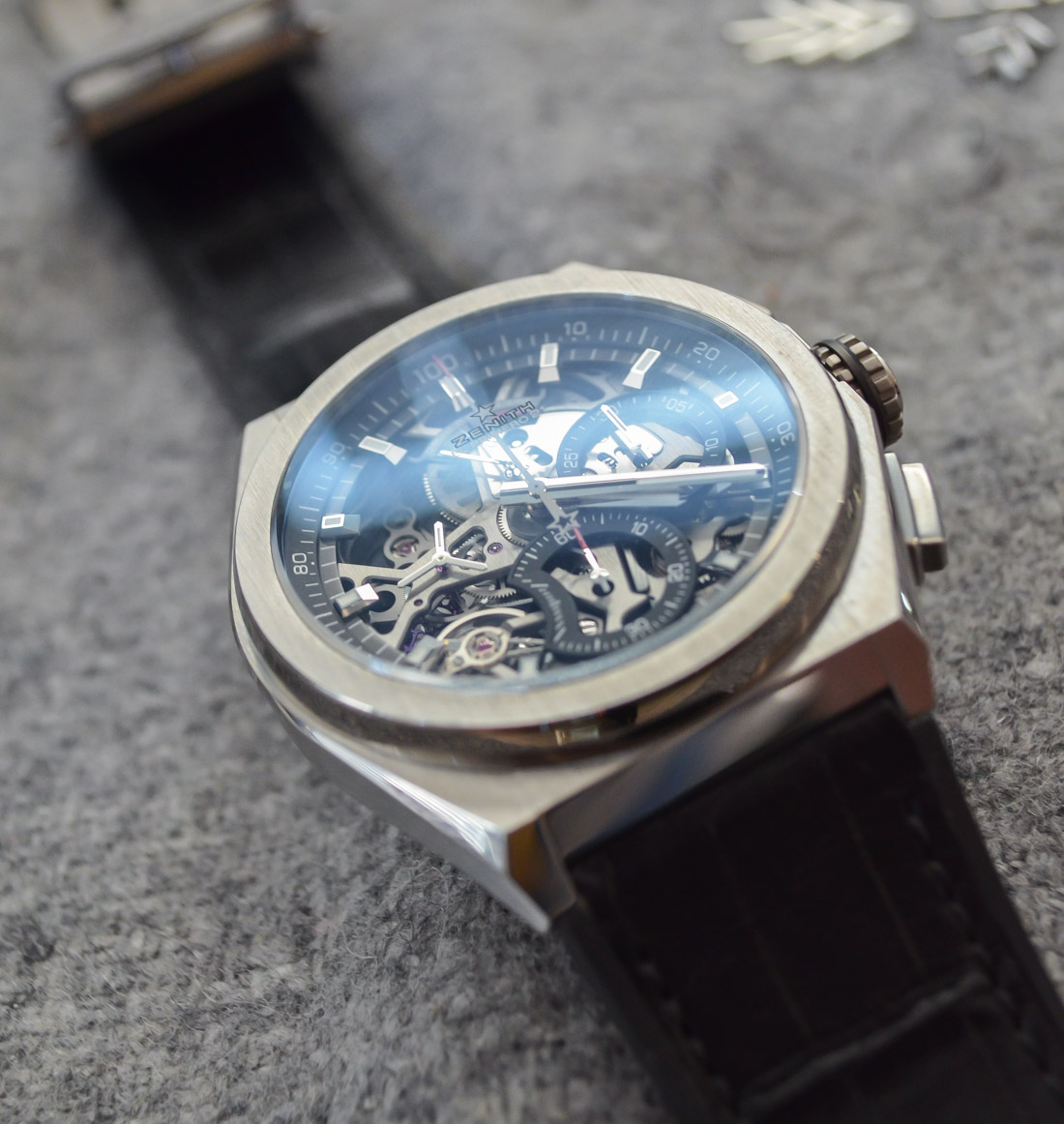 For me, it held a certain charm that I found appealing even almost 50 years later, and the “first mechanical chronograph” charm of the regular El Primero rode itself out for me. When Zenith announced that they were debuting a re-vamped El Primero Defy with a new movement, a new look, and a new attitude, I got excited even though the new Defy was a total step out from the original design (which later came without the unique case shape at Baselworld 2018 with the Defy Classic). The Defy El Primero 21 marries the best features of the original El Primero, with the other-worldly design DNA of the classic Defy models. 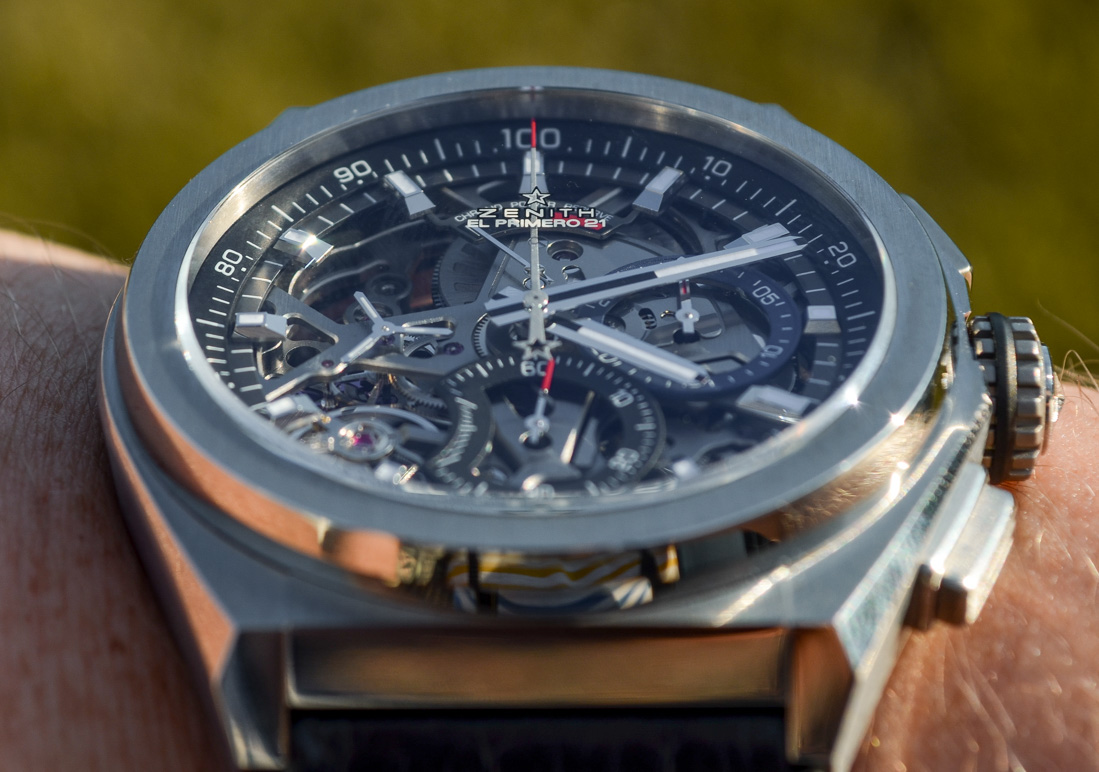 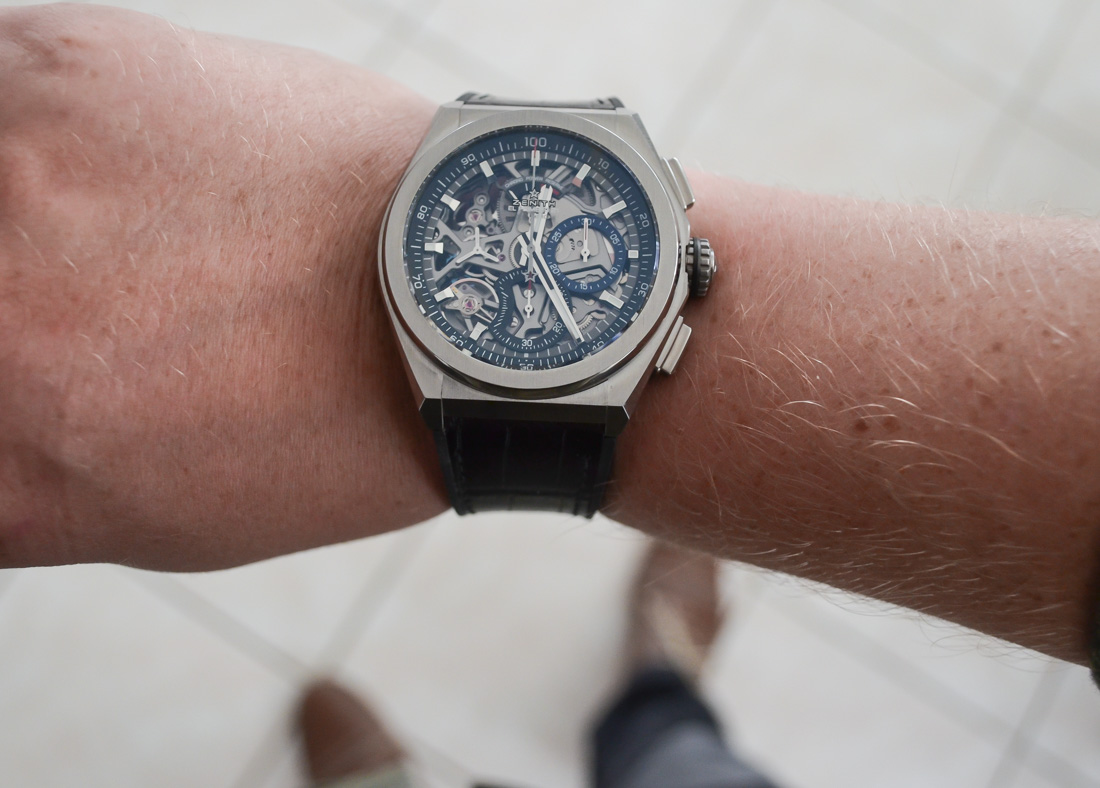 One thing I need to give credit for on the Zenith Defy El Primero 21 is that the watch simply looks and feels modern, if not futuristic. LVMH has long been weaving common DNA threads throughout three of their pillar brands. Hublot, Tag Heuer, and now Zenith have all re-done and released skeletonized chronographs in the last couple years. While they are all fitting into vastly differing price points, the designs do all feature a common design language. While I can agree that Jean-Claude Biver’s influence is definitely all over the LVMH brands, I think that the look and feel of the new Defy El Primero 21 fits a landscape that’s appealing to collectors who tend to sometimes overlook Zenith, with myself included. 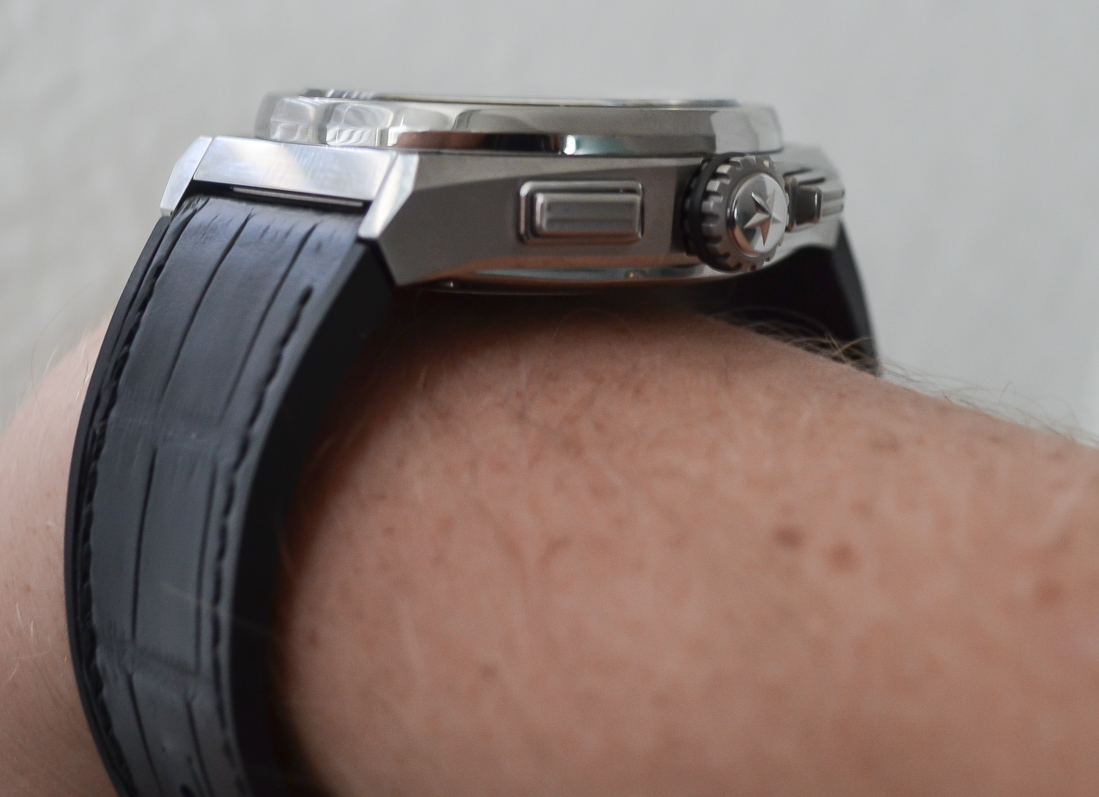 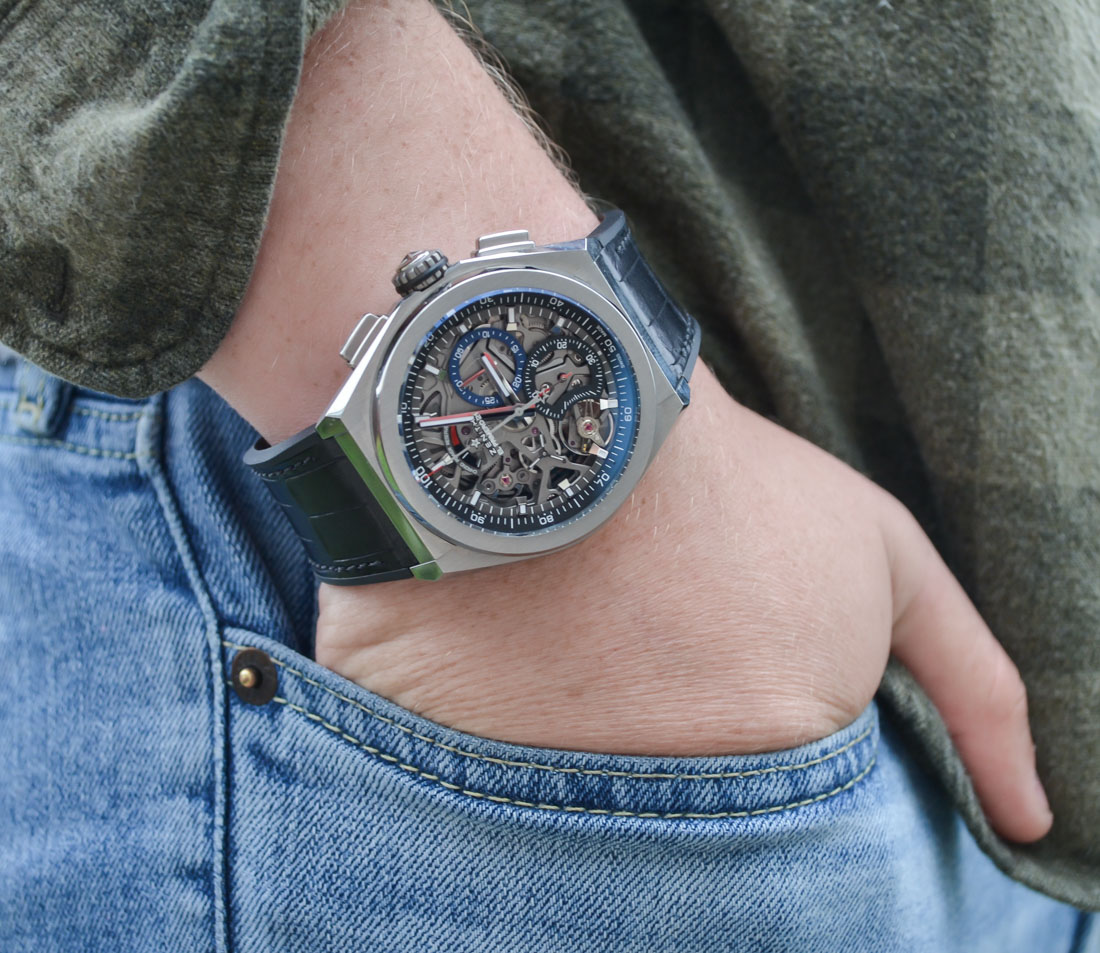 The brushed titanium case with polished edges measures in at 44mm x 14.5mm but wears a bit smaller. It sits nicely on the wrist with sharply tapered lugs that don’t make this watch feel as big as it is. One feature I honestly didn’t expect to like as much as I did, is the crown together with the oversized chronograph pushers. When I first saw the press release I thought the pushers looked twice as big as they should be, but after wearing the watch for a while, I realized how practical they were for daily use. While I think a lot of enthusiasts would admit to rarely or never using a chronograph, I found myself using it every chance I got if not for the sheer “cool” factor of hearing the sexy “bbbrrrzzzzzzzzzz” sound on every engagement. The oversized pushers made it much easier to activate without contorting your wrist into awkward positions – especially for me, since I wear my watches on my right wrist. The only issue I had with the extended pushers was that they were long enough that I once accidentally activated the chronograph while opening my car door. 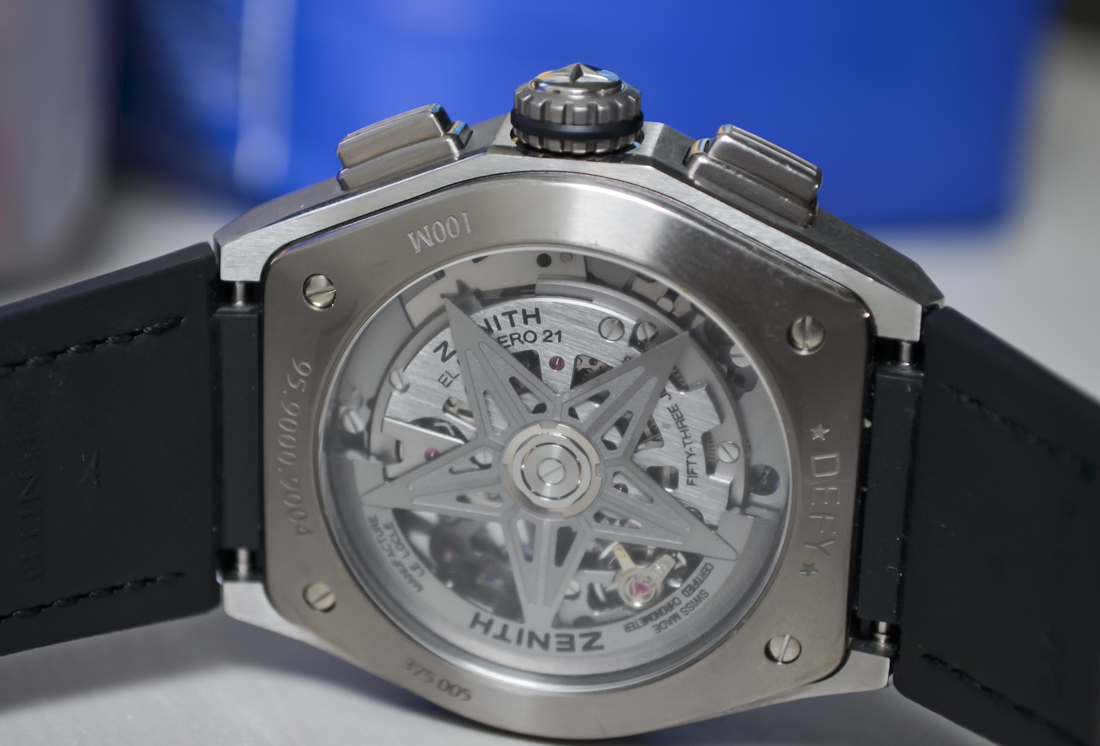 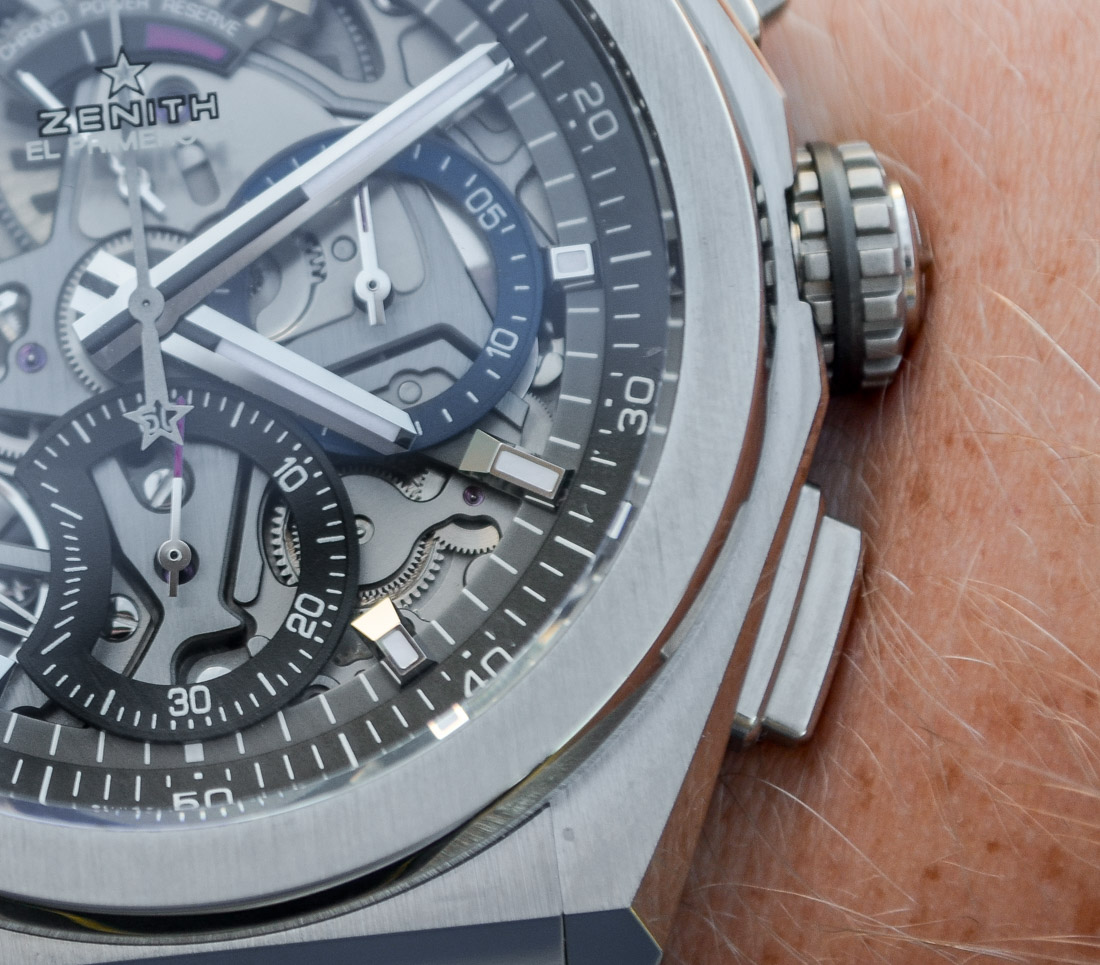 The movement inside the Zenith Defy El Primero 21 is very cool looking when you turn the case around. Since the El Primero 21 is the watch that is introducing the all-new (not the Carrera Mikrograph movement as was originally rumored) El Primero Calibre 9004, the function had to fit the contemporary look of the watch. Zenith has always been proficient and known for their 5Hz high-beat calibers and this watch pushes some envelopes both in design and function. Let’s start with the new “Carbon-Matrix Carbon Nanotube” used for the balance wheel, which immediately brings to mind images of green text floating down an old computer monitor, but not as visually inspiring. 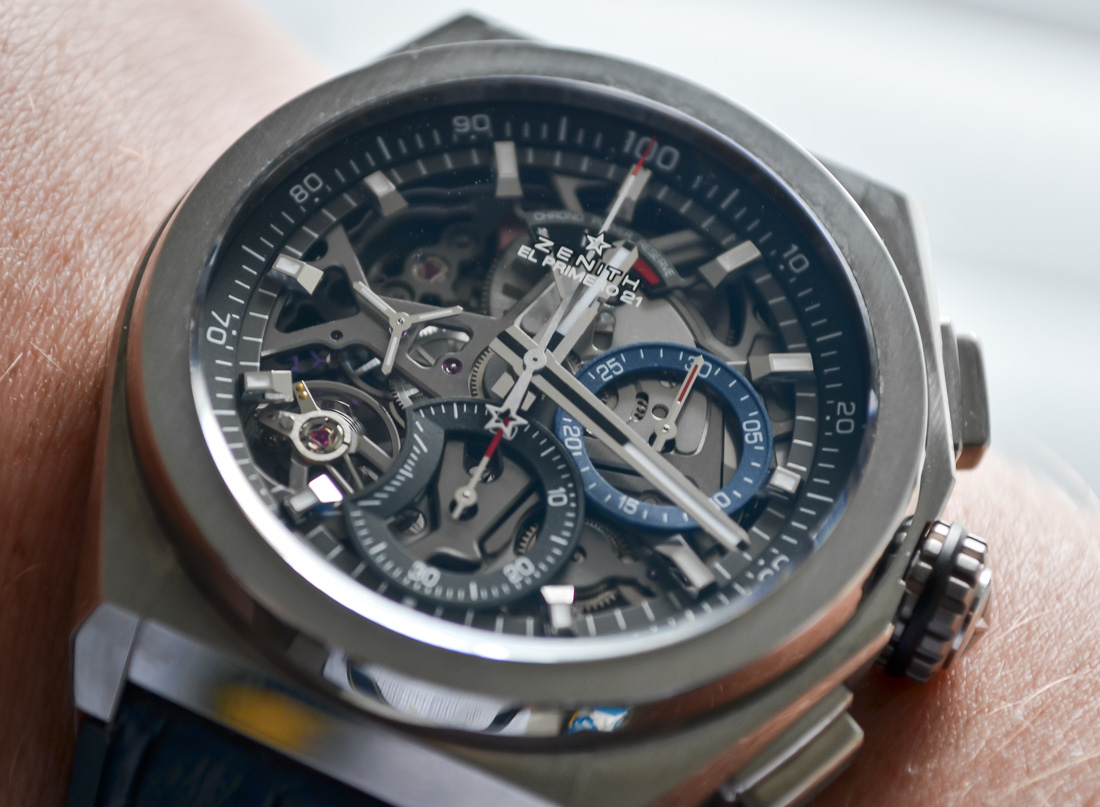 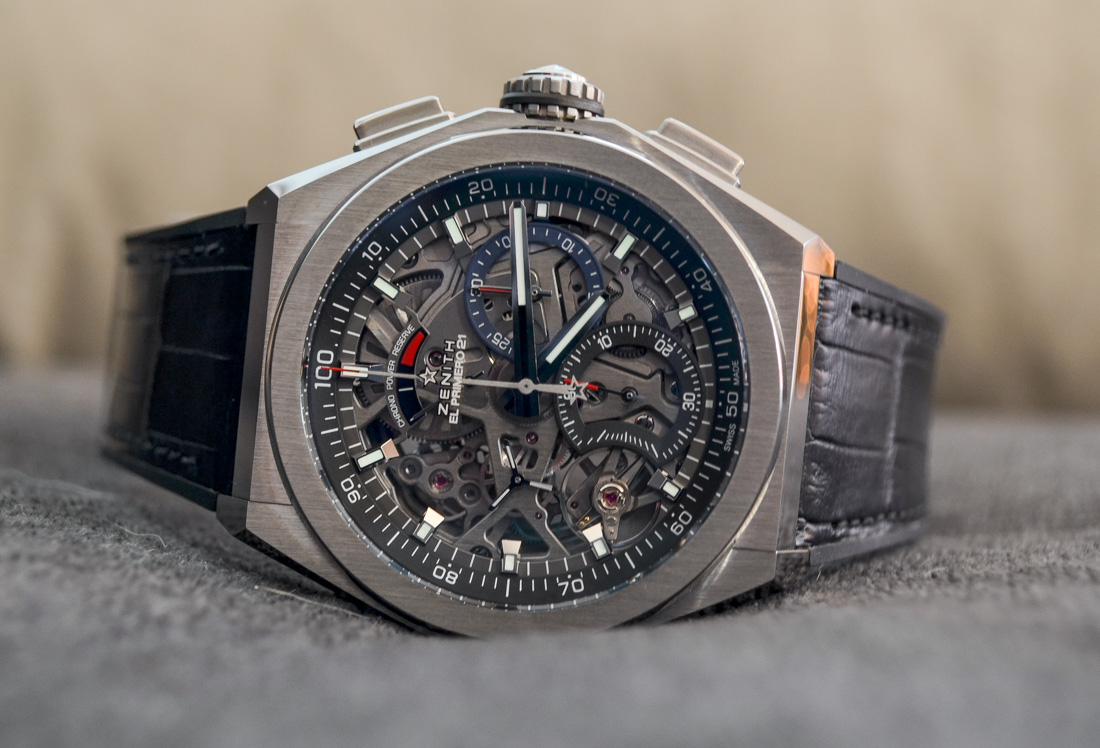 The Calibre 9004 utilizes two separate-but-integrated regulation systems – one for the normal time-telling functions, and one for the chronograph function. The 5Hz (36,000 bph) movement utilizes a chronograph that operates at a whopping 50Hz (360,000 bph). This allows for 1/100th of a second timing in a mechanical wristwatch – something only a handful of brands offer, and even less are (relatively) affordable. When you engage the chronograph, you can hear it spin up, and the seconds hand makes a full revolution of the dial every second. Seconds are then counted at the 6 o’clock sub-register, while minutes are counted at 3 o’clock. Because of the amount of energy and effort put into the chronograph, it can only run for 50 minutes at a time, while the watch itself carries a 50-hour power reserve. You can easily tell when you’ve reached that point because there is a power reserve indicator at 12 o’ clock. The entire mechanism makes for a stimulating show of technical prowess.